Our second show at London Fashion Week was a live-stream runway event. Collaborating with London-based designer Mark Fast, our Director of Artistry Pablo Rodriguez was in attendance to create a single aquatic-inspired makeup theme.

A transcendent look contrasted by the bold, colour-blocked chunky knits Mark Fast is known for, Pablo created a makeup theme inspired by a look from another world.

Using the reflection of light and bodies of water as his muse, Pablo combined the metallics featured in the Mark Fast AW21 fashion show with shimmer-inspired makeup. Whether you’re dreaming of Atlantis or life under the sea, this makeup look is perfect for the escapists, taking models to another world of mermaids and deep-sea phronima.

“The idea for this look was to capture the effect that you get when light reflects on water. The main feature was a few pieces of chunky silver glitter placed on the centre of the eyelid on top of the lash line, so they catch the light when the models blink. The rest of the look was all about metallic pastels on eyes, lips and cheeks.”

For the base: Pablo uses Skin Base Foundation and Beyond Liquid Highlighter to create a luminous effect, giving other-worldly glow.

For the eyes: Pablo uses Silver from the Liquid Metal Palette as a cream base all around the eyes. Currently out of stock, you can use our Pure Pigment in the shade Beguile for a similar effect. Set the cream shadow using our Powder Eye Shadow in Superstitious. Liberally coat top and bottom lashes in Masquara Raven.

Then, cut our Captivate False Lashes in half applying to the outer corners. Use Precision Ink in Abyss along the lash line. To complete the look, Pablo uses chunky glitter from a stationary shop in the middle of the lash line.

For the lips: For the mirror-shine finish, Pablo applies Beyond Lip Polish in the shade Charm to lips. 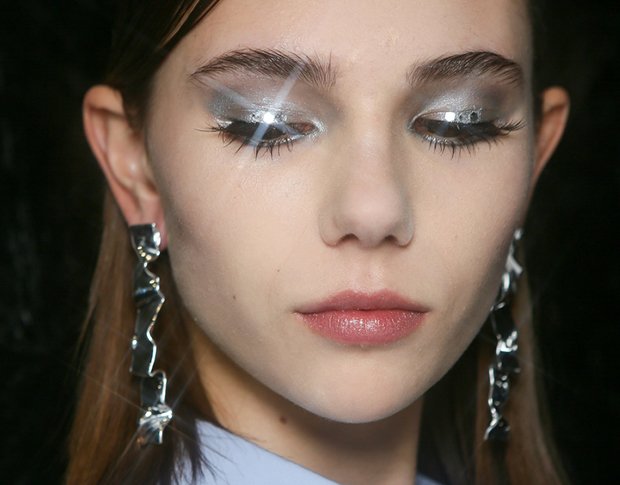 When I’m not writing or perusing the beauty section, I'm usually applying skincare or trying a new eyeliner. Most confident in minimal makeup with a bold lip, I invite you to join me on my journey to find the perfect mascara and red lipstick!

Why you need hydra veil in your make up regime

GO BEYOND: HOW TO GLOW THROUGH CHRISTMAS WITH THIS 2-STEP TUTORIAL

How to Apply Highlighter: An Illamasqua Guide to the Beyond Powder Highlighters