Unfortunately, I didn’t get to go to Manchester for the screening of the Sophie: A Dark Angel film, so I caught up with Claire from Propaganda who has been a pivotal figure in the creation and publicity of this film and has had close correspondence with Sylvia Lancaster.

Hi Claire. Can you tell me about the idea behind last nights event?

“We had been looking for somewhere to show the film not just to the UK press but also to the public as well as friends and family of Sophie and Sylvia to commemorate what would have been Sophie’s 23rd Birthday.”

Where was the event held?

“Manchester Cathedral Gardens was the perfect venue due to the tranquil yet poignant atmosphere right in the heart of Manchester City Centre. The news teams, including the BBC, ITV, Metro, Channel 5 and Sky News were there to film and interview Sylvia prior to the speech.” 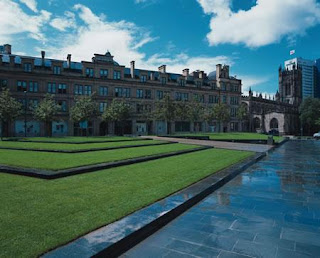 “The crowd started to gather around 6:30pm whilst Sylvia went from interview to interview with a bunch of 23 black balloons.

At 7pm, after an incredibly moving speech where Sylvia thanked everyone for coming, Illamasqua for our donations and support and spoke about the Foundation and it’s long term aims, Sophie’s best friend released the balloons into the night sky. The film was then played and there was not a dry eye among the 150 plus people that came to pay their respects.

The film continued on a loop until 11pm and people came and went, but all were completely silent whilst the film played out. It was hauntingly beautiful. Afterwards, we had a candlelit reception for the press, family and friends of the Lancasters.”

I also spoke with Julian Kynaston, Chairman and founder of Illamasqua, to ask him about his thoughts and feelings of the evening…

What were your thoughts on the evening?

“I enjoyed it very much. Whilst the film was playing, I didn’t watch it but watched the faces of those who had not seen it before and half of them were in tears and the other half who knew her could not bring themselves to watch it.

I knew then that we had accomplished what we had set out to do – to show everyone the harrowing reality of intolerance and prejudice that exists in our society today. To see so many people in one place come together and to stir that kind of emotion up in them was important to me. We cannot let anyone forget the case of Sophie Lancaster or what her case represents in wider society.”

Why does Illamasqua have such strong ties with the Sophie Foundation?

“The two are intrinsically linked – when Illamasqua was at it’s very early stages, when we were just cementing the core values of the brand – the celebration of individualism and the beauty of the sub-cultures, from goths to punks to club kids to drag queens and everyone inbetween – along comes this innocent young woman who simply because of the clothes that she wore had been targetted by a group of youths and murdered. I was disgusted, outraged and absolutely heartbroken that the values we are trying to promote at Illamasqua had been used against someone.

Illamasqua encourages you to look different and yet here was this young woman who had been killed precisely because of that. I got in contact with Sylvia and vowed to help support the charity. There was never the “we are a company who must find a charity to make ourselves look good” mentality; it is part of our DNA now.”

How much has Illamasqua raised for the Sophie charity so far?

“On the night, we presented Sylvia with a cheque for £5,000 which rounds up the figure we have raised through sales of our Sophie pencil.

We also had representatives selling the Sophie pencil and wristbands on the night. After the reception Sylvia, some friends and myself went out for dinner and Sylvia presented me with a framed picture of Sophie. Words cannot express the feeling that I felt at that moment. 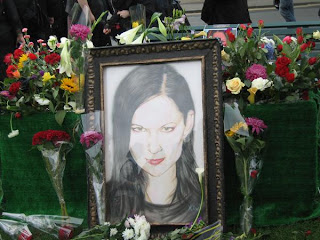 I feel very confident that the Sophie Lancaster Foundation can only go from strength to strength.”

The global media coverage, response from internet communities and the general public has been phenomenal. At last count, the film has had over 30,000 views on Youtube in little more than a day and last night saw the international premier on MTV. Thank you to everyone who has helped with the production of this film and to those of you who have watched and circulated it – let’s continue our efforts to ensure that this moving film is seen by as many people as possible. 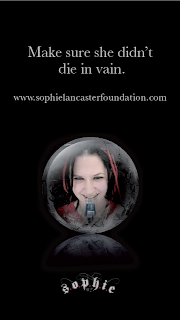 “This film is to mark Sophie’s birthday. This film is not pulling any punches. The message is too important, it has to go out there.” Sylvia Lancaster

Electro Tartan: The Electrify Palette | For the Fearless

FRIGHT OR ENTICE: LACE MASK HOW TO