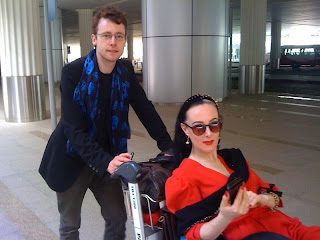 I am sure that everyone has been effected in some way by the closure of the air ways – apparently 150,000 Brits are stuck abroad waiting to get home – and over the past week Illamasqua accounted for eight of them!

Calum [National Account Manager] Carl [Managing Director] and Alex Box [does she really need an intro?!] flew out to Dubai last Monday for the grand launch of Illamasqua at Bloomingdales in Dubai

Calum tells me: “I was blown away by the enthusiasm and excitement shown for Illamasqua by those living in Dubai. The support we have received from local media and the Bloomingdales department store made for an amazing event.”

However, getting back from Dubai has proven to be a different story… you can see that Calum [in the gorgeous McQueen scarf] and Alex [along with Carl – who I assume is taking the picture!] made it to the airport, only to be told that the flights were all cancelled. Alex decided to stay in Dubai -I assume thinking that the delay was only very temporary, I haven’t actually spoken to her! – whereas the boys decided to have a bit of an adventure…

First, they flew from Dubai to Zurich [which turned out to be the last flight out of Dubai!] hoping to catch a flight from Zurich to the UK. There were also no trains from Zurich so they hired a car to drive the distance to Calais [stopping off at Reims on the way]

Carl decided that they should reset the Sat Nav to take a “short cut” [ladies; know this feeling when your man decides to take the “short cut”?!] which ended up with them driving over a mountain behind a lorry stuck at 40km an hour. Needless to say, not much of a shortcut…

After [eventually!] overtaking the lorry post-mountain and getting to Calais, Carl and Calum jumped on a coach to get to the ferry due to the backlog of cars waiting to board the ferry.

Seventy hours from arriving at Dubai airport, Carl got home courtesy of his Dad picking him up from Dover, Calum jumped on a train from Dover to London and Alex? Well, Alex was still in Dubai! The latest gossip is that she has befriended some American hippies and they are driving through France now! She is due in tomorrow, so I will get the full account and post asap!

Halimah [Product Development Assistant] and her husband went on holiday to Spain and were due back on Friday. Latest news of them? Stuck in traffic in France [isn’t everyone?!] in a rental car.

Kathy [Director of Operations] is in America, luckily with her family!

Daniel [Head of Training] is ‘stranded’ in New York. I say stranded with more than a hint of sarcasm; if there was one place I could be stuck in the world, New York would definitely be on my shortlist.

Trudi [Director of Professional Strategy] is currently in Australia and Chris [COO] was stuck in Germany over the weekend – worrying time for him as his wife is due to give birth and it was a bit touch and go if he would make it back in time!

You Are Beauty Gallery

15% Off All Illamasqua Synthetic Brushes!