This month’s Product of the Week [yes, yes I know, I know…] is the unbelievably popular Powder Blusher in Katie. 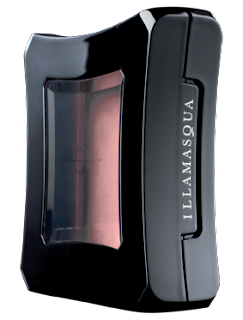 I have personally never been a big fan of pink blusher [coral, coral, coral for me!] but I can’t deny the sales figures and the shouts-from-the-rooftops about this blusher! It was named after Illamasqua’s Brand Director Kate Massarella [before Katie joined the team!] as it was her favourite blush in the collection – she has quite pale skin, deep brown hair and brown eyes [the italian in her!] and the pop of pale pink that this blush gives her means that it is never out of her handbag.

Katie even has it’s own Youtube video, it’s that popular! I mean, a nine and a half minute video dedicated to a blusher?! Has to be put forward for a Product of the Week nomination!

This blush has received a massive amount of coverage both in Editorial and online, being described as

“As a self-confessed blush addict, I was euphoric when I received the powdered blusher in Katie to test. A little background on my coloring—I am ridiculously pale with dark hair and pale hazel eyes. I need blush to look alive. Most of my blushes tend to be in a deep rose or red shade and I blend them down, but even then, it’s probably a little too much color for bolder lips.

For years, I’ve been searching for a pale pink blush that is a good counterpoint to dark lips, but everything I’ve found was so pale that it didn’t show up on even me or it just didn’t last very long. Answering my prayers is Katie. First off, the packaging is gorgeous.

The blush itself looks like a nondescript pale pink. Looks are deceiving. Once applied with a big, fluffy brush, I had the prettiest rosy cheeks every. It was pale enough to not compete with my other makeup, but had enough color impact that I looked alive and fresh. The best part? I didn’t have to reapply and this carried me through a whole 12 hours before I finally removed it when I washed my face at night.
I don’t think I can say enough great things about this blush, other than if I could give 6 stars, I would. I can’t wait to try their cream blush now…”

All of Illamasqua’s Powder Blushers are high in pigmentation and the size of the product means that the pieces last a long, long time.