Our Theatre of the Nameless campaign features the beautiful and iconic Princess Julia! We caught up with her for her insight and perspective on what it was like on the day of the shoot and how she got into character…
What was it like to be the feature in Illamasqua’s AW11 campaign?
I’m thrilled with the final result, as a lover of make-up this was a dream come true! It really was. I’ve been following Alex Box since she started working with Gareth Pugh and was fascinated by the way she approached make-up and mark-making. The world’s she creates within the premises of style have a multi layered approach where she explores both detail and the bigger picture.
In essence the pictures and presentation of Illamasqua’s ‘Theatre of the Nameless’ convey a mystery, hints of decadence and throughly forward thinking approach to what make-up can create. 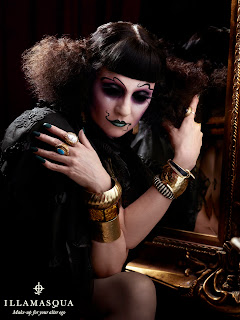 What was it like on the day of the shoot?
Walking into the underground location of an 18th century Bathhouse turned club in Bishopsgate I immediately felt transported into a secret world, it was fairly early in the morning as I discussed clothes and accesories with the wardrobe department. Then hair… a tightly manicured bob frizzed out. The ‘look’ was Anita Berber, the 20’s and 30’s Weimar peroid in Germany, Otto Dix and the like. I’ve read the amazing story of Berber and her antics and in a sense being involved in clubs, art and style now relates directly to her world of that time. 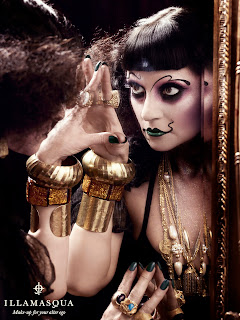 Discussing concepts with Alex Box was enlightening, as she made me up we spoke about the compounds of color, pigmentation and ways to create different illusions. Layering and painting, much like working on a canvas, she peered close up and then stood away to take in the full effect of her work.
How did you get into character?
It wasn’t hard as I was already aufait with the total look, the process, and i’m fascinated with process, built a visualization throughout the afternoon, so on set and infront of a camera I felt transported into a dark and sultry world. Trying out various positions with photographer Jem Mitchell directing me as we went I think he captured an atmospheric and enticing series of shots that both complimented the ethos of Illamasqua and the work they do.
Thank you to Princess Julia for the interview!
http://www.illamasqua.com/

Get the Theatre of the Nameless Look…