If you haven’t already checked out our latest film called ‘Born Again’ starring Vicky McClure; take a look now!
BAFTA winning actress Vicky McClure joined us at our Headquarters today, along with Illamasqua’s founder Julian Kynaston and Head of Professional Development, Spob. A live Q&A took place answering your questions, and we received some very insightful answers. First up, Julian!
Allie Meek: What was the specific moment/where were you when you thought of the idea for creating Illamasqua?
I was sat in the Little Angel pub at Whitby Goth festival. I had just taken a seat next to a 6ft7 tranny, who I ended up getting to know really well, her alter ego was called Alison. I ended up having a really good night with this group of people and I think it was this experience that curbed a lot of my preconceptions. Looking around this club there were lots of great looking women and great looking men wearing make-up and bathing in the beauty of it all. It appeared that the connection between all these people was not so much the music or the club; it was the make-up. This is where I became really excited and wanted to take this idea of using make-up to access your alter ego to the high street.
Carrie Wentworth: Hi Julian. I read that you started Propaganda (creative marketing agency based in Leeds) aged 22. That’s very inspiring to someone like me who is looking to start her own business: what are your top tips?
I genuinely think to follow your heart and if you want it bad enough you will get it. What you lack in academic skill you can make up for in determination, energy, passion and belief. For me, I think the number one ingredient was ignorance in the business side of things, and on the other side just this belief, fascination and love affair for the things that I was doing.
Matt: What is your response to people who have questioned the morals that this video could be said to be promoting? Effectively, the girl is committing suicide?
Julian: When you are trying to strike a love affair with the customer like we are, you are not going to please everybody. We know that there is not a single grain of badness behind that film. However, we also know the morals and position of Illamasqua actively celebrating alternative cultures such as the gay and tranny scene sometimes offends people.
For me, I can identify with the ‘Born Again’ film on a personal level. I used to be a football hooligan, and I killed that character to become something different and change.
Spob: To me the video represents that we can completely change ourselves and why not do it in a really bold way? Change just makes life more exciting.
Vicky: For me it never felt like a suicidal scene or ‘wrong’ in any way, the water scene is beautifully shot and I had so much fun doing it.
Alison Darby: How do you think this film celebrates the identity and values of Illamasqua as a brand?
Julian: I think the character Vicky plays is in all of us. When you see someone dressed up for an occasion it is as though they are playing their alterego for that one night. For example, at Halloween parties I have hosted, you see people explode and act wild, this is because they are made-up and for this one night their alterego is existing. At Illamasqua we believe that the products and the brand together open a door where your alter ego can exist on a permanent basis.
Spob: We all know what red lipstick does to us women when you wear it and the attention you can attract. It’s amazing what a big change something so simple can make. 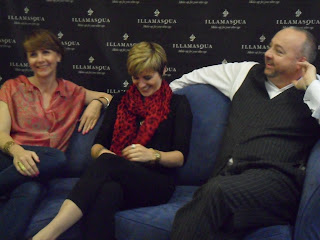 Look out tomorrow for Vicky McClure’s exciting answers to your questions!
http://www.illamasqua.com/

London Fashion Week: A Child of the Jago & Illamasqua

An Indian Summer in Leeds…