I am going to be interviewing some beauty editors from sub-culture magazines over the next few months to celebrate alternative beauty and incredible creativity with make-up. Illamasqua was built on the principle of being true to yourself, awakening your alter ego and enjoying the art and creativity that Illamasqua make-up gives you – Alex Box and Julian Kynaston’s own relationships with the Goth and Punk scenes cement this fundamental idea. 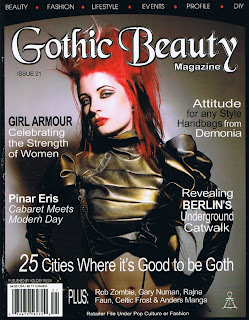 First up is Acid PopTart, the fashion editor from Gothic Beauty.

Alex: When did you join Gothic Beauty? How involved are you with the Goth scene?

Acid PopTart: I came on board of Gothic Beauty a few years after 2000. I had launched my own magazine called FLICK around the same time. My reasons for that were to start showcasing the immense amount of alternative talent and celebrating the scene, which is some of the reasons Gothic Beauty was started as well. My modeling and writing was taking up so much of my time (I was even modeling for the first issues of Gothic Beauty), that I closed the doors on my own publication so I could focus on my other projects. 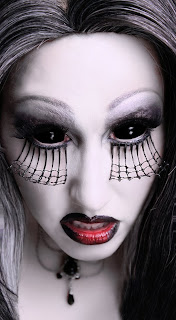 Through fan letters I know a lot of our audience really enjoys a magazine that’s more suited to their tastes. In a lot of the work I do for Gothic Beauty, I like to expose different sides of the scene from punk to goth and all the tiny sub genres that splintered off from the sub culture. I was a young and impressionable lass when the scene hit fresh and hard, my best mate was from England so I got a lot of exposure for music from her and I became a DJ (which is where Acid PopTart comes from) and was just living this awesome underground scene which I still do. Gothic Beauty is a way to express that still; to celebrate it.
Alex: Why are you a big fan of Illamasqua? What is it about the core beliefs and values of the brand that appeal to you?

Acid PopTart: For me, I’ve always lived my life with no regrets. As my fame grew, I met a lot who wanted to change me, or were just outright jealous. Critics will hit you where they think it hurts and eventually I ended up with a tag line, “Here, without apologies”. It became my mantra because I had been through so much that people were going to have to accept it and move on. If I didn’t back down from skinheads who were bashing my skull into a brick wall or don’t apologize to family for who I am, why would I back down from critics and apologize to strangers? 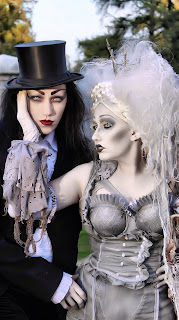 Illamasqua, as strange as it may seem that a company actually has soul, spoke to me on the same level. When I got to interview you all, I saw how rooted you were in the almost uncatchable moments of life, driven by passion not by greed. I saw a fearlessness to never back down and I loved the independent spirit Illamasqua possessed. Your products are the same way, bold and fearless. It was a like a brand made for me and my attitude! I love how art becomes make up, and make up becomes art. How you continue to take it to the next level, so many are afraid to go beyond basic black eyeliner and powdered skin. Illamasqua celebrates the numerous faces and alter egos that lurk inside and for someone like me with multiple personalities, that works out fabulous!

Alex: As a champion of alternative beauty, who is your ultimate icon? Whose alternative style do you admire and why?

Acid PopTart: Oooh, that is a tough one. Anyone really who isn’t afraid of going balls out with no regrets. I love over the top and dramatic from Thierry Mugler and Alexander McQueen’s designs to the classic Siouxsie Sioux and ever changing Nina Hagen and fearless Wendy O, and I loved the dark glam goodness of Pete Burns back in the 80’s and 90’s. And regardless if this makes me lose my “goth card” but I respect Lady Gaga for going for the gold and doing her thing. But I probably see more style and looks in movies (and my drive to be a filmmaker) and love the atmospheres created from the silent films and edgy classics like Metropolis, stylized visions like Sin City and the dark whimsical worlds of Tim Burton. 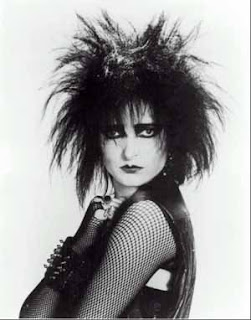 Alex: What are your favourite beauty products and why?

Acid PopTart: Illamasqua has such a wide array of blushes… and as I’ve learned from modeling and working with make up artists, contouring is one of the most overlooked things in a look. I love that Illamasqua went with what would be consider some rather “dangerous” choices in colours and it’s that fearlessness to do something like that. The boldness of the colour selections in not just the blushes but lipsticks as well, all of it is so atypical, and I love it! All the products are so versatile as well. I’m so pleased with the durability and silkiness of the pencils. Illamasqua also puts out some of the best fake lashes, and I’m dying over the decadence of your birthday celebration lashes which are just gorgeous… 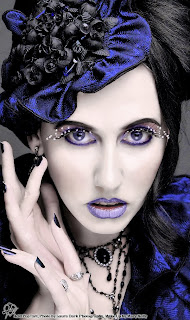 I think I recognise those False Eye Lashes!

GET THE LOOK: FESTIVE MAKEUP USING OUR BEYOND GLOW VAULT GIFT SET

Beauty Before Age – Best of Press

How to contour depending on your face shape: an illamasqua guide

Illamasqua Australia Shines At Christmas In The Sun