We’re celebrating another successful season at the AW19 London Fashion Week with our Director of Artistry, Pablo Rodriguez who led a team of makeup artists at six exciting shows, creating makeup looks inspired by the designers’ collections.

Fashion week to me is so exciting as so many creative forces collaborate intensely together in such a short time. Having Illamasqua supporting the designers is a great opportunity for all of us, from the dialogue with designers, stylists and hair dressers to create the final look; to explore what makeup trends are coming up an even test products that are being developed as we speak.

We’ll be talking you through the looks created for each show, what the inspirations were behind the collections and share the products we used so you can get the catwalk look for yourself! 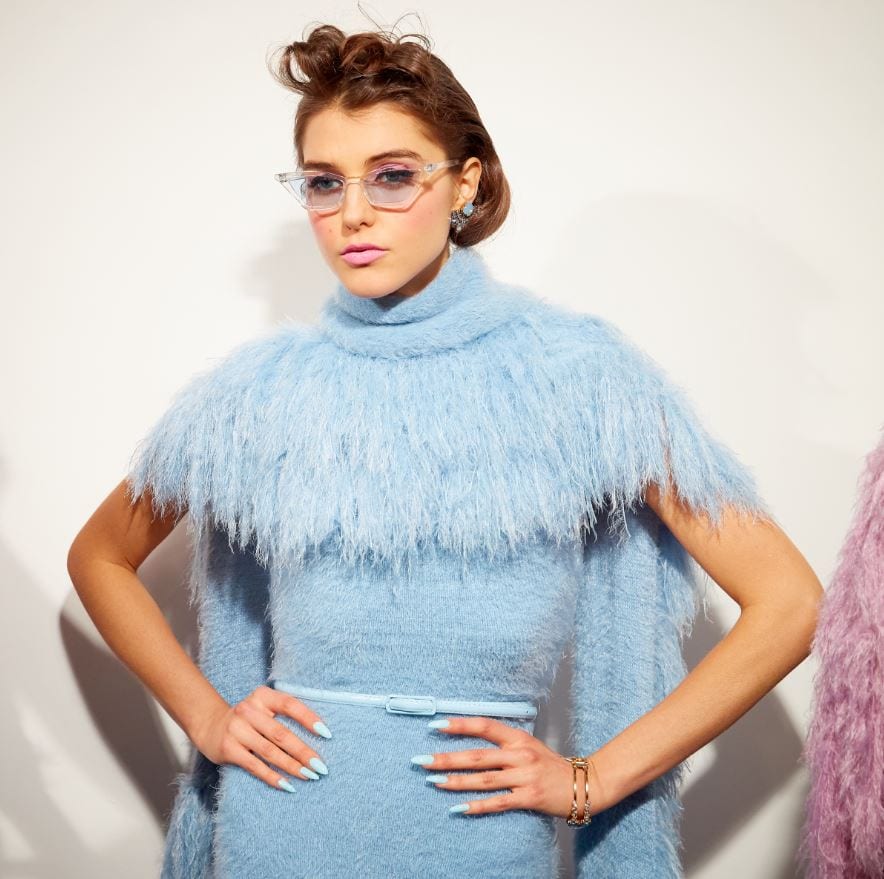 The makeup for Mark Fast’s  AW19 show was inspired by 50’s glam (think Doris Day) and included gorgeous pastel pinks and lavender. “Statement eyes paired with pink lips” was the focus of the look according to Pablo. For the eyes Pablo used our Gel Liner, applied as a precise, thick feline flick and Bridget Bardot-inspired false lashes in ‘Captivate‘. “The rest is a monochrome palette in lilacky pinks”, explains Pablo. A stain of soft pink was applied on the lips using Lipstick in ‘Plunge‘, paired with a wash of lilac on the eyelids using Powder Eyeshadow in ‘CanCan‘. Skin was kept as natural as possible, using our Matte Primer as a base, followed by a very light application of Skin Base Foundation in places where the skin needed a little coverage. Finally, Cream Blusher in ‘Laid‘ was dabbed onto cheeks with fingertips to complete the delicate oh-so-pretty 1950’s inspired look. 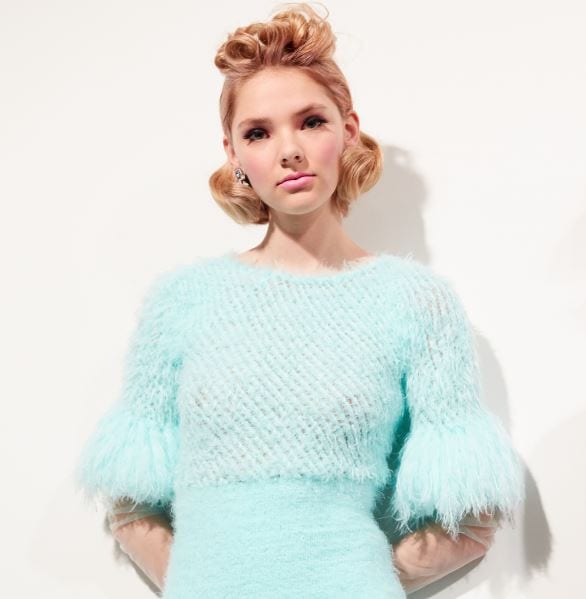 For his AW19 collection, Ryan Lo mixed sophisticated glam with childhood inspired silhouettes, saccharine pastels and monochrome looks, a collection which evoked a timeless birthday party of dreams. Reflected in the makeup, the look evoked a paired back rock and roll and depending on their outfits, the models wore a mixture of looks. There was the ‘floating lip’ look, using our bright pink lipstick in shade ‘Eurydice‘, which was paired with a natural matte skin using Beyond Veil Primer and a light application of Skin Base Foundation. 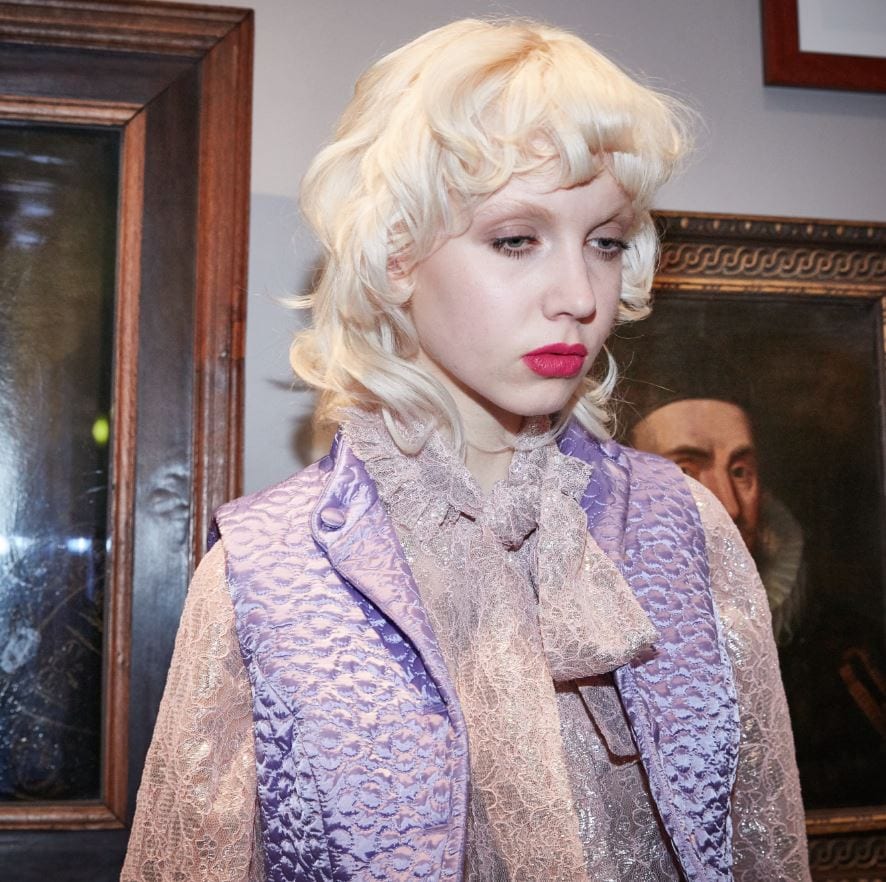 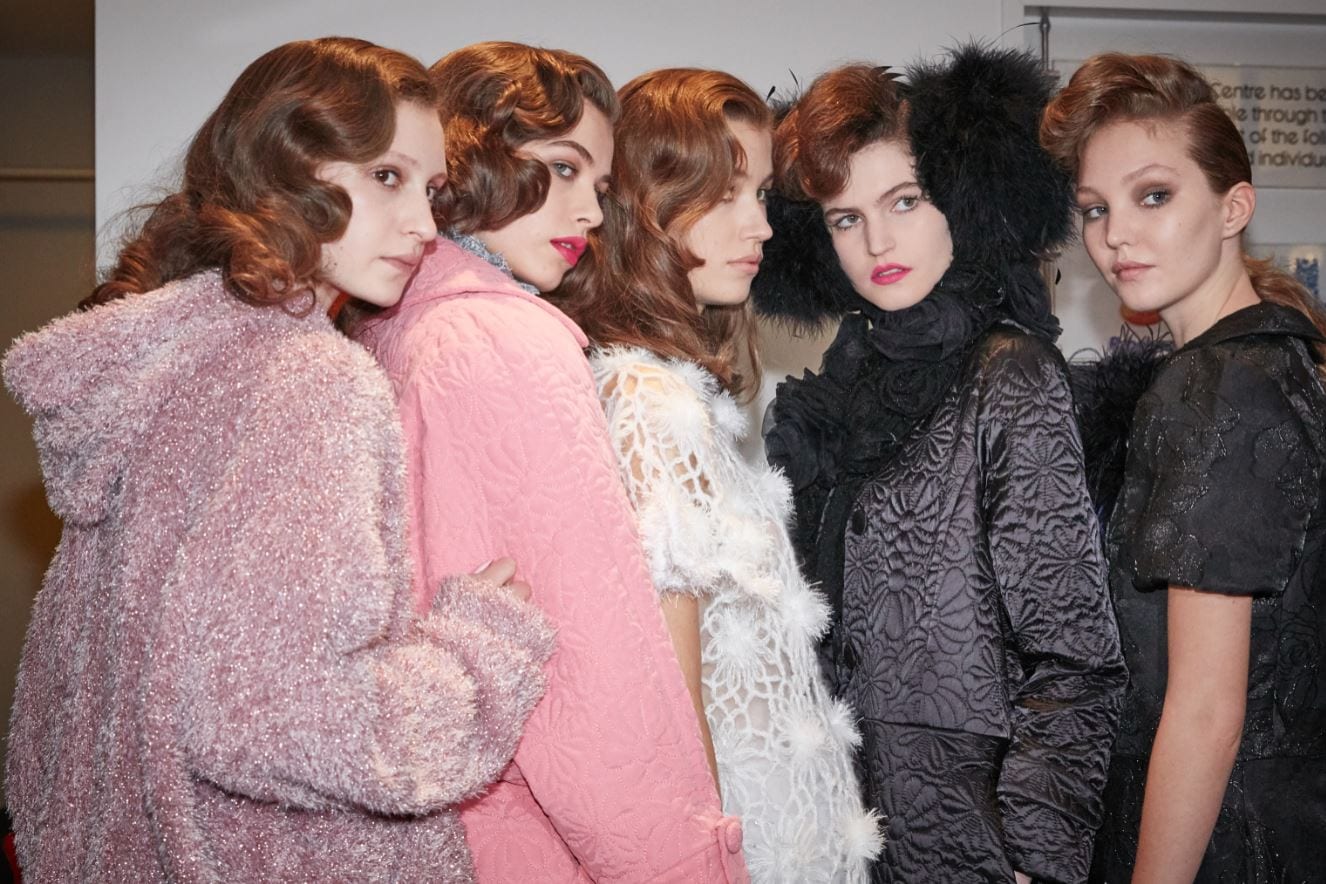 For the eyes, Cream Pigment in ‘Hollow‘ was used as an eyeshadow and applied all around the eyes, this was also used to subtly contour the cheeks. A slick of Black Masquara on top and bottom lashes completed the look.

For Richard Malone’s AW19 show, Pablo crafted four different looks, each focusing on either skin, lashes, liner or lips. The first look, ‘Matte Bare Canvas’ was centred on the skin which was prepared using Matte Veil Primer and the Skin Base Foundation Concealer Pens which were applied “only where coverage was needed”. Translucent Powder was then pressed onto the skin with a powder puff for an extra matte finish. “This was used to create the base for the next three looks – skin with a nothing vibe”, explains Pablo.

The second look consisted of a blurred nude lip using our Glamore Lipstick in ‘Buff’. It was applied on the lips and then blurred irregularly around the edges using a dry cotton bud. “This is a neutral, muted colour, but I wanted it to look like a stain all around the lips” says Pablo. 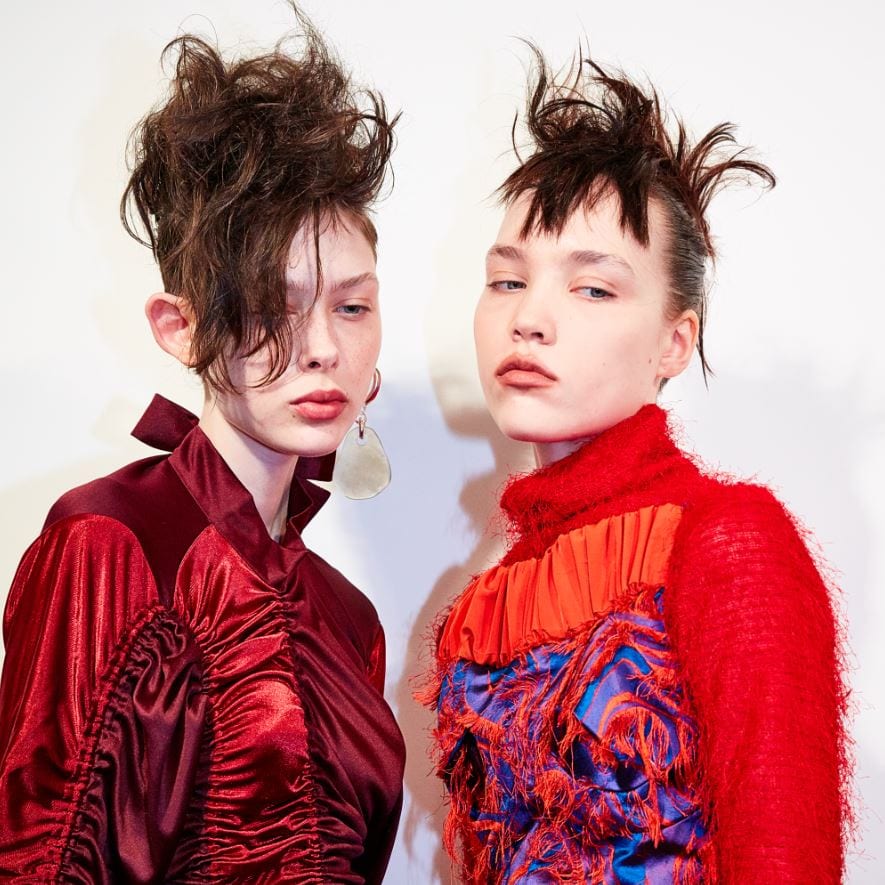 The third look was the ‘Semicolon Liner’; for this look, Pablo used our Gel Liner on the in the inner corners of the eyes and set on top with Powder Eyeshadow in ‘Obsidian’. A black dot was placed in the centre of the eye inside the waterline to give the illusion that the pupils are bigger than usual. 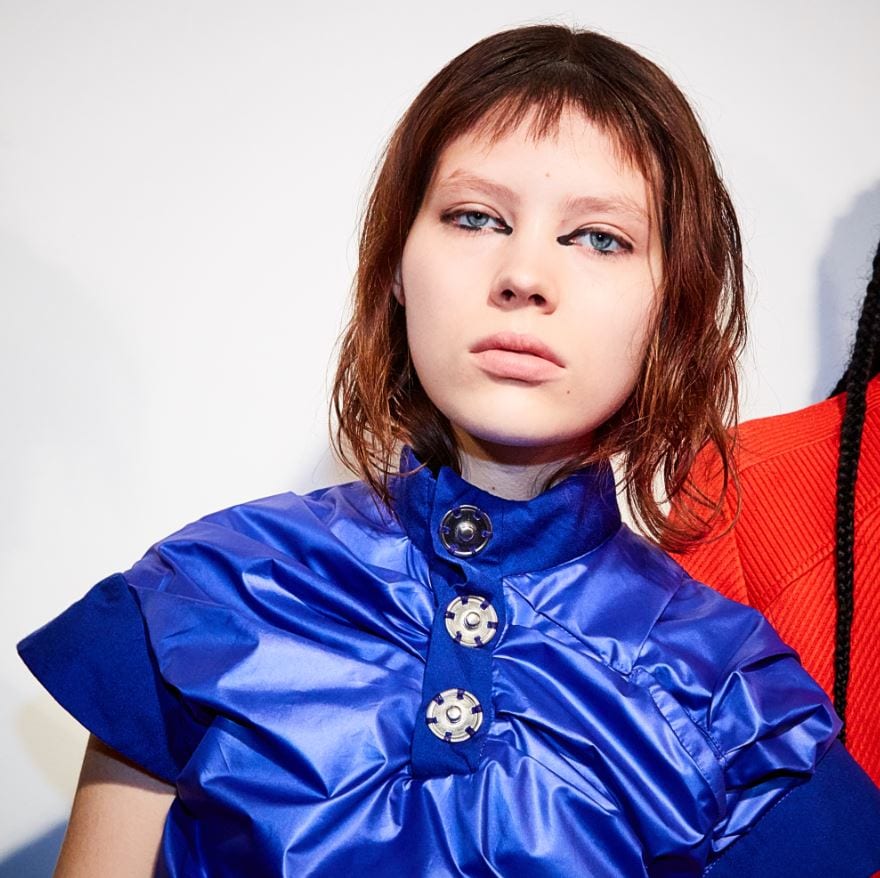 The final look was ‘Meteorite Lashes’ – tons and tons of Gel Liner was applied onto the top and bottom lashes using a spatula. “The effect is like lumps of coal around the lash line, not spider lashes” says Pablo. “Once I applied one coat, I went in with lots more on both the top and the bottom lashes. If it transferred, I just left it. I wanted this look to be extreme, always add more.” 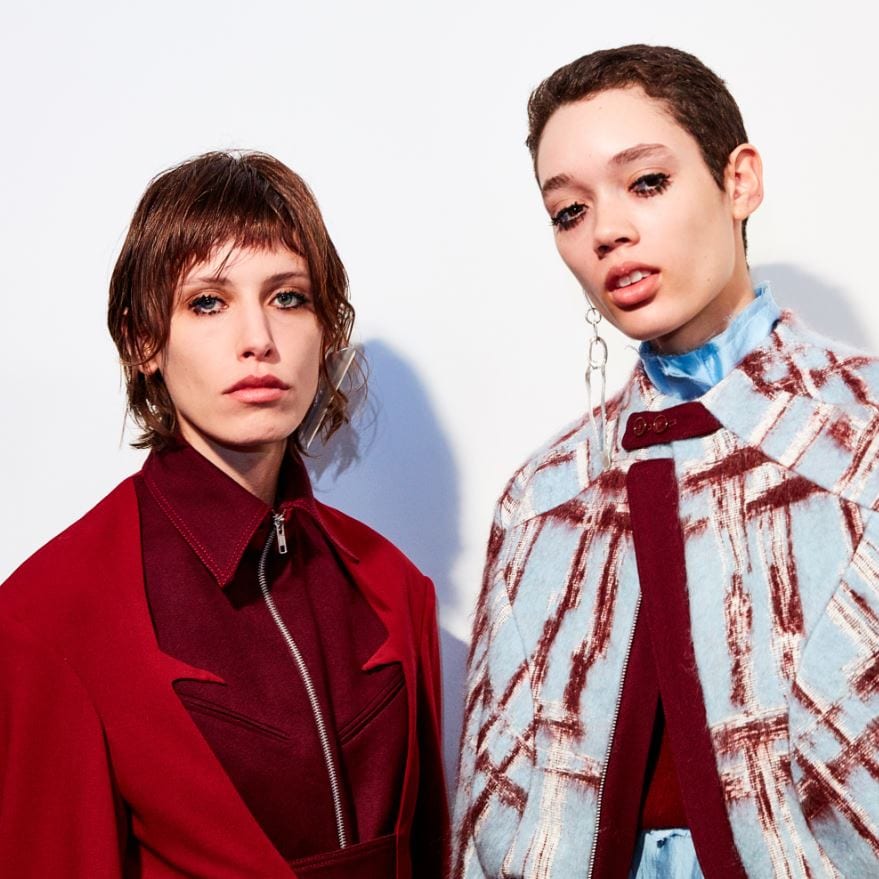 Sophisticated minimalism was the inspiration behind Marta Jakubowski’s AW19 collection, and this was reflected in the makeup created by Pablo. On the eyes, Pablo created a ‘Buttonhole Liner’ look… “I used Precision Gel Liner in Black in the inner rim of the eyes, to keep it graphic and precise.” Lashes were left clean, without mascara to emphasise the eyeliner shape. Pablo finished off the look with a classic red lip, using best-selling shade ‘Midnight‘, “this shade is universally flattering, very Kate Moss”. 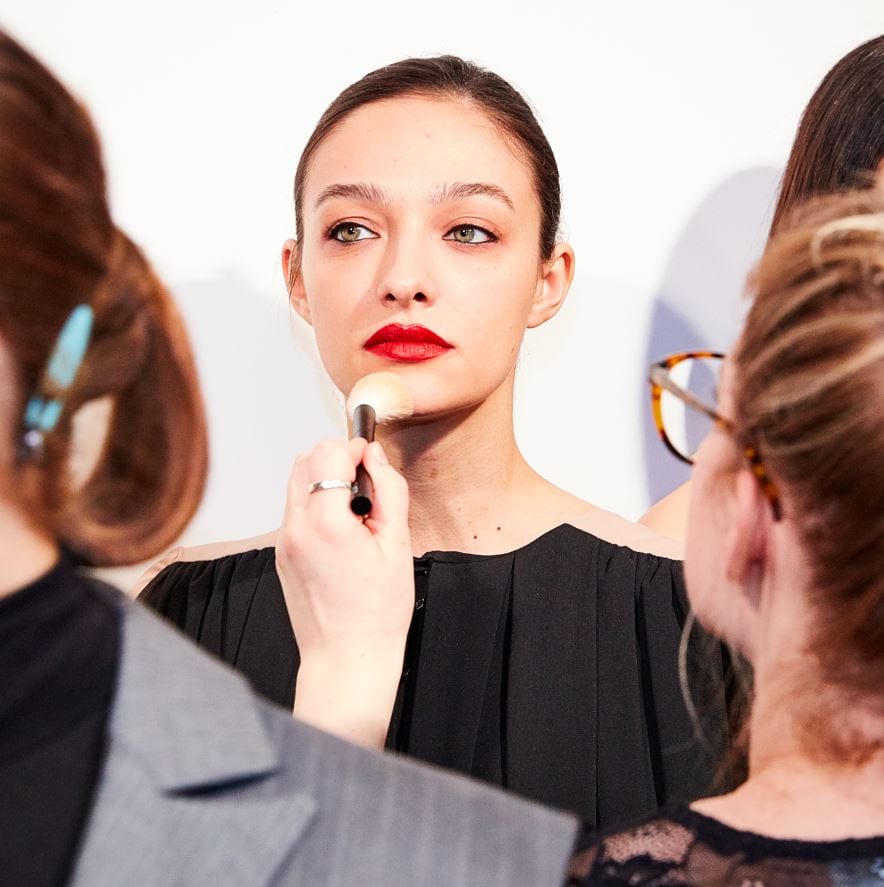