The beautiful handpainted mannequins created for the Melbourne Illamasqua counter are in the air as we speak, soon to land in their new home, as the backdrop for the Illamasqua theatre.
Below is a sneak preview of the artistry and creativity that has been employed in creating them and an interview with Christabel from Australia about their evolution…

What are the names of the artists who worked on the mannequins?
Ashley Coggins designed the tattoos on the Rockabilly mannequin and the graduate next generation avant garde makeup artists from London West Thames and Southampton Solent University who worked on all of the mannequins are as follows headed up by Kat Sykes: Emma Foley, Lucy Carter, Tamara Ransey – Crockett, Hayley Williamson, Jen Thomas, Sally Nelson and Sally Davidson. 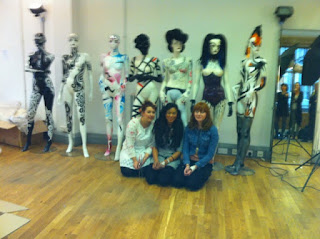 Concept for each mannequin (i.e. Nu Rave, Punk etc)
The two henna influenced mannequins which will be placed at the front of the new Melbourne counter, Illamasqua’s soon to be Australian flagship store, were inspired by and elements were taken from the mannequins Illamasqua’s Creative Director Alex Box created for the flagship store based at 20 beak street London W1. They come as a pair, one is black and the other is predominantly white, they are the reverse of each other almost simulating each other’s alter ego. They are a modern take on traditional Henna tattoos however with much more of a fashion influence and partly inspired by nouveaux 1920’s design.

Each of the other mannequins are inspired by subcultures featured in the Illamasqua brand film starring British up and coming actress Vicky McClure. We wanted to inject some personality in each of the mannequins so that it was true to the people who belonged to that era. 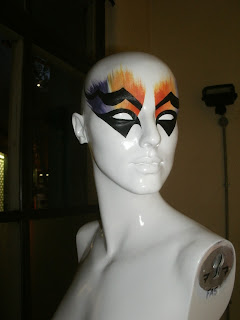 Punk
The Punk mannequin was inspired by the eighties punk movement, based on real people rather than just ‘trends’. What people actually wore for example we used real stockings on the mannequin and sprayed over them with black acrylic paint via airbrushing to recreate the texture. We decided on strong bold make up on the face and bold tribal markings on the body plus used real mascara wands to create a Mohawk. The punk era was the antithesis of rebellion and self expression therefore we wanted to ensure the mannequin did this era justice.

Rockabilly
We wanted the Rockabilly mannequin to have a distinctively human like look with realistic tattoos on the arms and back designed by Ashley Coggins. We wanted people to be inspired by this mannequin in Melbourne, sharing a little taste of the self expression found here in the UK. The body will be painted in acrylic featuring elements of the rockabilly culture from music and culture to chequered clothing patterns, roses and playing cards.Very graphic bold design.

Fetish
For the fetish mannequin we used a lot of pearlised spray to create a wet latex look simulating long wet latex gloves. The bondage geometric design that prevails across the mannequin we wanted to continue in the form of a structured bodice skirt and the mannequin will be wearing a gimp like mask made out of shiny material and hand decorated with light reflective studs.

Nu Rave club kids
The Nu Rave Mannequin takes vibrant and outrageous colours worn by Nu Rave kids decorated by Geometric shapes inspired by Illamasqua’s Spring Summer 2010 Body electrics collection. This subculture was very influenced by fashion. The Mannequins head is decorated by mirrored mosaic so that it represents a disco ball reminiscent to the subculture.

Gothic
The goth mannequin is inspired by cyber goths, gothic culture and Victorian high necks. It is predominantly monochrome taking influence from tribal graphic markings with a few 3d elements including a big wig with dreadlocks. A purple laced corset/body design decorates the mannequin beneath the chest. The mannequin sits in a very confident way symbolic of this very confident and intelligent subculture. Monochrome 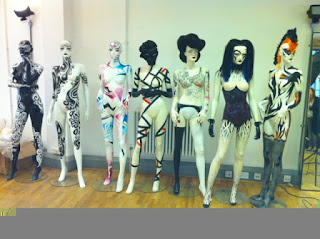 How did they build their mood boards? I.e. where did they get their inspiration from?
From real people, street style books, photo archives, Alex Box’s past work

What products or materials are they using to create their mannequin?
Mainly spray painting with acrylic, piping electric tape fetish skirt, lace and texturing materials to get patterns…

How did they first get involved with Illamasqua?
The girls are all extremely talented next generation makeup artist graduates Illamasqua have taken under their wing, sponsoring graduate shows from the professional arm of the company here in the UK.

‘I am very excited about the opening of Illamasqua at the Myer Store in Melbourne. The space that we have been given will allow us to demonstrate the real theatre of the brand’
Joe Corre, Joint MD

‘We are all very excited about Australia and especially our space in Melbourne which allows the Illamasqua brand the freedom to express’
Julian Kynaston, Founder and Joint MD

Interview With An Editor: Part I