For all those in the UK, you may have caught Courtney Love on the Jonathan Ross show last Friday. And perhaps the eagle eyed amongst you may have noticed she was wearing the S.O.P.H.I.E bracelet. 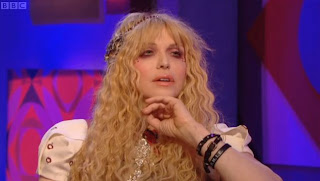 I’ll admit, I didn’t but my sharp eyed flat mate did! I did a screen grab for you from a Youtube clip of her appearance.

Alex Box created the look on Courtney Love for the Jonathan Ross show using Illamasqua products including Powder Eye Shadow in ‘Savage’, ‘Maybe’ and ‘Courtesan’ as well Cream Blusher in ‘Rude’ and Medium Pencil in ‘Vow’ all over the lip with a slick of Sheer Lipgloss in ‘Brilliant’ on top.

Courtney is currently in the UK promoting the reformation of her band Hole and brand new album. If the track Samantha is anything to go by, it’s going to be pretty good! The band will also be playing at the 02 Shepard’s Bush Empire on Wednesday 17th February and be selling S.O.P.H.I.E bracelets with all proceeds going to the Sophie Lancaster Foundation.

It’s our birthday when’s yours?

GET THE LOOK: Seasonal party makeup

Express Yourself with Attitude

GET THE LOOK: UNVEILED ARTISTRY PALETTE

ILLAMASQUA ICONS: WHY DOES EVERYONE LOVE MASQUARA RAVEN?