On Saturday 19th September, Hannah Marshall presented her first SS 2010 collection at Somerset House. The show consisted of LBD’s in a variety of architectural forms, from sculpted shoulders to pointed hips and jagged spines. The edgy, yet very wearable, collection was adored by Alex, who describes the make-up look as, “very sexy, very desirable with a strong graphic. Hannah and I work very closely on make-up looks as she is so clued up on make-up and creating a statement through make-up. I wanted the overall look to be very strong and masculine from the front, yet soft and feminine from the side.” Cue frantic googling of Hannah Marshall to try and find a profile catwalk image from the show! I couldn’t find one, so you’ll have to take Alex’s word from it! This is a very unusual look, I say to Alex. She laughs, “I call it slith – the slick goth!” 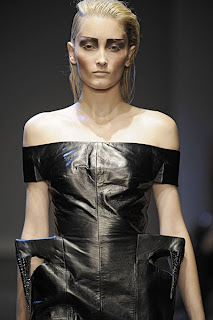 If you don’t know much about Hannah Marshall, you will soon – she has designed outfits for the likes of Florence and the Machine and counts Erin O Connor as a close friend. Erin even suprised the fashionistas on the front row by closing the show. Alex, of course, did her make-up. 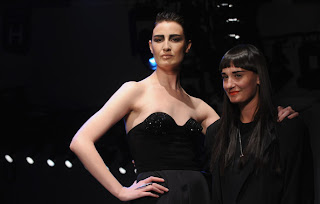 I personally love the make-up from this show and I have a step-by-step from Alex on how to recreate it, so I shall put a post up about that later this week!

Alex also worked with Malcolm Pate on a film called ‘Encryption’ for Hannah Marshall that ran during the show. “It was filmed where I live – it was such a great location, really industrial and fitted the mood perfectly.”

Alex also worked on shows for Wintle [“a menwear show with a very strong, Leonardo di Caprio style brow”] and Carolyn Massey [“such fun – the feel was sunburnt, festival boys so I used a lot of reddish bronzer on the face and neck!] 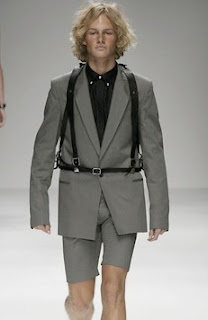 So, other than fashion week, what else has Alex been up to? “I’ve had a lot of time talking to journalists about my book. Not just fashion and beauty press, but art and culture press too as the book is as much about art and photography as it is about beauty.” Sounds tiring. “It is! I also have Homes Etc coming over to my flat soon to run a piece on my decorative style.” I’ll keep an eye out for that one! 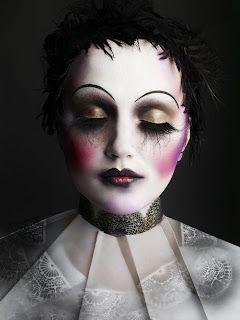 What is on the agenda for this week? “Well, today I have a meeting with Katie to discuss product development and then I am heading over for a Gareth Pugh test shoot.” Further probing gives me no details – all artists are sworn to secrecy on their looks with designers until after the show.
As it is Paris Fashion Week next, Alex is set to be very busy, so I ask her how she takes time out. “When I’m in Paris, I always take time to go around the vintage shops. And there is a great bar in the Louvre hotel, which is where anyone whose anyone is after the shows!”

Alex sets off for Paris tomorrow for a test at Anne Valerie Hash in the morning and again with Gareth Pugh in the evening. Wednesday is the show day for both Anne and Gareth and on Thursday I have the test for Veronique Leroy followed by the show on Friday. “I’m then jumping on the Eurostar from Paris to London and early Saturday I will be on a train to the Masterclass is Selfridges Trafford which I am really looking forward to. In the evening I will be back to London and then back on the Eurostar.” Phew! “Doesn’t stop there – Sunday is the test for Leonard and Monday is the Leonard show. Tuesday is the test for Collette Dinnigan and Wednesday is the show. After that I shall be coming home and chilling out!”

A Note From our Brand Director

Beauty School Drop in to launch in Liverpool and Leeds