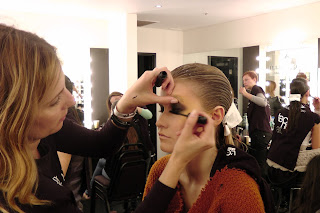 Creative Director Alex Box designed the looks for the show, including the beautiful Golden Goddess look for the 10 models opening the show. With their hair slicked back with gold leaf and 24 carat gold nails the make-up had to look sensational…

Satin Primer was used all over the face for a dewy, fresh base. As all the girls had had spray tans prior to the show, a Cream Foundation in a shade a couple of shades darker than their natural skin tone was used and blended and buffed to perfection using an Illamasqua Highlighter Brush

After dusting off any shine using Loose Powder and an Illamasqua Powder Brush,

Contour the face using Illamasqua Powder Blusher in ‘Rumour’, ‘Spite’ and ‘Disobey’ depending on the model’s skin tone. This was applied using Blusher Brush II, using the tapered edge to smooth colour under the cheekbones, down the sides of the nose and from the eye lids up to the temples to create an architectured face. 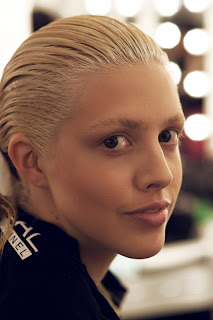 Next, Alex used a small amount of Bronzing Duo, using the darker shade to enhance the contour and the lighter shade to add a touch of creamy highlight to the top of the cheekbones, down the centre of the nose and across the hairline.

Alex’s now-trademark trick of applying soap to the eyebrows to flatten them against the skin so that they ‘disappear’ was part of the look to keep the focus on the smokiness of the eyes.

To define the eye shape, Powder Eye Shadow in ‘Wolf’ re-exaggerated the shape initially created using Powder Blusher in ‘Disobey’. Alex used an Illamasqua Eye Shadow Brush to press on the colour and blended high up beyond the crease using Blending Brush I.

Medium Pencil in ‘Sophie’ was used for an inky black smudge along the waterline and under the lashline, and Powder Eye Shadow in ‘Gimp’ used on top to build colour intensity and to allow for a gentle fade out to deep grey.

Gimp was also used on top of Wolf on the top eye lid, almost up until the brow and blended out again. The lid and outer third of the eye should be the most intense. 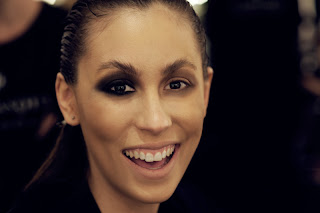 Liquid Metal in ‘Solstice‘ should be spattered in to the inner corner of the eye and roughly blended in to the eye colour not further than 1/3 of the way onto the eye lid, with the concentration of the colour being at the inner corner. Alex used her fingers and an Illamasqua Lip Brush for a more defined shape to apply the Solstice.

A sprinkling of Pure Pigment in ‘Marvel’ adds a shimmering yellow tone to the gold and is also used with Blusher Brush I to dab the colour on to the temples and on the upper third of the cheekbones.

For a final shot of glimmer, add a touch of Pure Pigment in ‘Android’ to the outer corners and along the lash line to blend the line of the lashes and the smoky black eye colour. 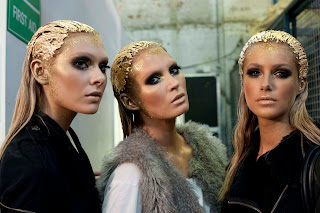 For a gentle, dewy highlight, a 50/50 mixture of Liquid Metal in ‘Solstice’ and Satin Primer was applied to the top of the lip. The lips were blended out [to keep the focus on the super-smoky eyes] using a touch of the Cream Foundation used for the skin and a touch of Sheer Lipgloss in ‘Brilliant‘ to the centre of the lips. 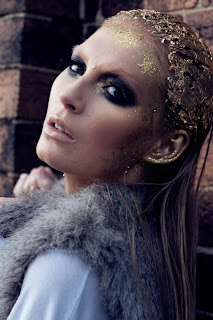 Gold glitter was pressed on to the skin for a bold look, like the models had been rolling about in gold sand. This was picked up by the flash of the photographers bulbs beautifully on the catwalk.

Below is a picture of Alex touching up the models prior to the press call. 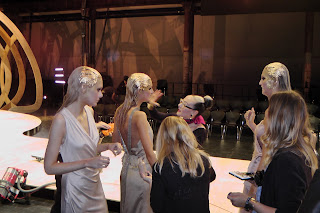 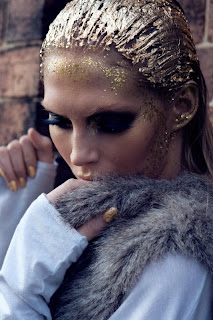 ILLAMASQUA ICONS: WHY DOES EVERYONE LOVE THE UNVEILED PALETTE?

DID YOU KNOW YOUR MAKEUP KIT HAS AN EXPIRY DATE? GET THE DETAILS ON OUR BESTSELLERS